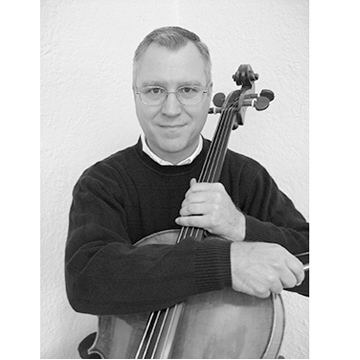 Michael Pecherek has extensive experience as a cellist, educator and conductor.  He holds a Bachelor's degree in Music Education from NIU, and two Master's degrees; his first in Cello Performance, and his second in Orchestral Conducting.  As a cellist, Mr. Pecherek has been a member of the Classical Symphony Orchestra-Chicago, the Rockford Symphony, the Kishwaukee Symphony, the Fox Valley Symphony, the Beloit-Janesville Symphony, and he is currently the principal cellist of the Illinois Valley Symphony Orchestra, a position which he has held since 1992.  He was the founder and conductor of the Illinois Valley Summer Chamber Orchestra, and co-conductor of the Illinois Valley Youth Symphony Orchestra from 1992-2012.  Mr. Pecherek maintains a private cello studio, frequently performs with area ensembles, and is an advocate for the fine arts in the Starved Rock area.  He is also an accomplished drummer who has played with several Big Bands as well as his own Jazz combos.  Mr. Pecherek has been Head of the Music Department at Illinois Valley Community College since 1997.   He teaches Music Theory, Music Appreciation, Fundamentals of Music, Cello Lessons and he coaches Chamber Music.  He is an award recipient from the prestigious Who's Who Among America's Teachers, for educational excellence.